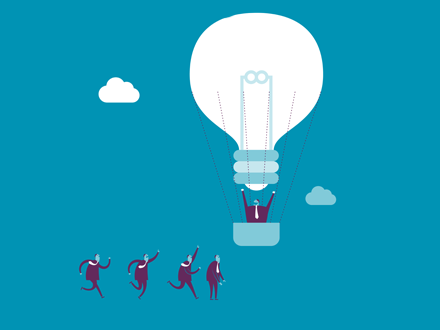 Jeremy Caufield said that ‘Our biggest problems arise from the avoidance of smaller ones’. Are your leaders and managers guilty of avoidance? Gillian Hyde, Chief Psychologist at PCL, explains how to identify it – and the problems it can cause.

Our history is littered with examples of leadership that has gone off the rails, where the positive traits that propelled individuals into leadership roles have tipped over into the so-called ‘dark side’. A person who is commanding, colourful, influential, and charismatic, for example, can turn into a manipulative, authoritarian, attention-seeking and self-centred boss.

These types of excessive personality characteristics make compelling management headlines. We see titles such as ‘Dark Side of Charisma’ and ‘Snakes in Suits’. However, there is an alternative spectrum of derailment that can knock both individuals and the organisations they work for off track.

Avoidance: the art of moving away from people

Bob Hogan, a prominent psychologist and expert in personality assessment, has identified three personality tendencies than can lead to management derailment: Moving Towards, Moving Away and Moving Against People. This article focuses on the Moving Away From People type, characterised by avoidance and social anxiety that can lead to loss of trust and commitment from others in the workplace. Research carried out by Psychological Consultancy Ltd (PCL) shows that certain sectors seem to attract more people with avoidant personalities than others, including the public sector and emergency services.

PCL, has used the Hogan Development Survey (HDS) for many years to identify potential derailers in the workforce, during which time it has accumulated a wealth of data across a variety of industry sectors. An analysis of the data found that the public sector and emergency services have a higher proportion of individuals in the Moving Away cluster than the private sector or, indeed, other industries such as finance.

Based on an assessment of over 5,500 individuals, the research shows that, on average, public sector employees are more cautious and socially anxious than their private sector counterparts. Furthermore, public sector employees are less likely to display the same levels of persuasive, influential, self-confident and innovative styles of behaviour found in the private sector. Being more self-conscious and concerned about failure may inhibit managers from voicing their opinions or making the independent contribution they are capable of. They may also become more inward looking and uncommunicative when under pressure and find it hard to ask others for help or advice. So, while the public sector is less at risk of the managerial excesses typically associated with the private sector, including arrogance, bullying, dogmatism or flamboyant and poorly thought-through innovation, there is also a downside to the Moving Away tendencies of this group. These disadvantages can have an equally counterproductive impact on the individuals, their colleagues and the organisations they work for.

Turning now to the emergency services, the sample of over 500 individuals working in this sector was compared to almost 400 people working in insurance and over 200 in finance. The research suggested that emergency services employees showed an extreme version of the public sector pattern described above. They tended to have lower self-esteem and lower self-confidence and were more likely to withdraw from others at times of stress or when feeling insecure.

Are your leaders too distant?

This research highlights that derailing behaviours come in many guises. The issue may not always be about people having a tendency to talk too much, craving the centre stage or being charmingly manipulative. Sometimes, derailing behaviours are much more prickly. Adjectives used to describe Moving Away types include distant, cold, remote, irritable, defensive, volatile, reserved and stubborn.

The risk for Moving Away types is that they distance themselves and/or push others away through their unattractive and avoidant behaviours. They can find it difficult to build alliances at work and to encourage commitment and loyalty from their team.

Organisations need to be aware that these less showy derailers (compared to the Moving Against types) can, nevertheless, have an equally negative impact and counterproductive effect at work; they need to be alert to the signs of Moving Away derailers, particularly in their senior management, and to offer coaching and personal development.

Gillian Hyde is Director of Psychological Consultancy Ltd. She has 20 years’ experience in the field of business psychology and has a particular interest in the subject of psychological derailers, having carried out research and published many articles on the subject. Hyde is a Chartered Occupational Psychologist with a BSc in Psychology from UCL, an MPhil in Criminology from Cambridge and an MSc in Occupational and Organisational Psychology from Birkbeck College, London. Gillian is a founder member of the Association of Business Psychologists and an Associate Fellow of the British Psychological Society.

This article was originally published by the Institute of Leadership and Management. For more information about the Hogan dark side of personality, including HDS training and assessments, please contact info@psychological-consultancy.com