After gaining popularity in the fields of developmental and clinical psychology, resilience has emerged as a key topic in organisational research. This is unsurprising considering the range of benefits associated with a ‘resilient workforce’. Given that the world of work is often characterised by changing organisational structures and turbulent intrapersonal and interpersonal processes (Cheng et al., 2020), characteristics that can facilitate greater performance in such contexts would clearly be valuable.

Connor and Davidson (2003) define resilience as embodying “the personal qualities that enable one to thrive in the face of adversity”. Resilience is considered a supportive factor that enables professionals to adapt to the physical, mental and emotional nature of their roles (Cameron & Brownie, 2010). It is also seen as a protective factor against threats like emotional exhaustion and depersonalisation (Manzano Garcia & Ayala Calvo, 2011). Greater resilience has the potential to reduce the risk of burnout and staff attrition and promote staff retention and occupational mental health (Edward, 2005).

This has led to a range of services, interventions and training programmes claiming to develop resilience. A review by Britt et al. (2016) found evidence that these programmes resulted in some improvement to outcomes including health, well-being and performance, but noted that few studies had examined whether these benefits remain over time, and those that did noted gradual declines in the initial improvements. Similar sentiments were echoed in a meta-analysis by Vanhove et al. (2015). Yet critically, these researchers found that when resilience-building programmes were targeted to employees in need, as opposed to blanket implementation for everyone, they were not only more effective, but that this effectiveness increased over time.

The Risk Type Compass (RTC) is a trait-based personality assessment that views the ‘Five Factor Model’ of personality through the lens of risk. It is a Registered Test with the British Psychological Society’s Psychological Testing Centre, having been audited against the technical criteria outlined by the European Federation of Psychologists’ Associations.

Completing this 82-item assessment provides scores for 18 subthemes, which combine to create two scales: the ‘Emotional:Calm’ and ‘Daring:Measured’ scales. The combination of these two scale scores locates participants in one of over 200 positions of a 360° spectrum (see Figure 1 below), which is illustrated by a ‘dot’ on the compass. The dot’s location also serves to assign participants to one of eight ‘Risk Types’ (or an ‘Axial’ group). The two underlying scales also combine to create the ‘Risk Tolerance Index’ (RTi), which provides a 1-100 score denoting individuals’ overall risk tolerance. 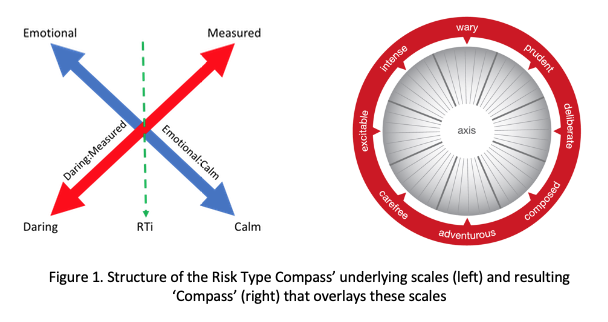 The Emotional:Calm scale is concerned with the emotional elements of risk disposition. It plots an individual’s tendency to be emotional, apprehensive and anxious at one end of the scale, or calm, confident and resilient at the other. In the context of the Five Factor Model, this scale strongly aligns with trait ‘Neuroticism’. The scale consists of ten 4-item ‘subthemes’.

The Daring:Measured scale is concerned with the cognitive elements of risk disposition. It reflects caution, preparedness and need for certainty at one end, and impulsiveness, flexibility and happiness to work with ambiguity and uncertainty at the other. In the context of the Five Factor Model, it draws primarily from the factors of ‘Extraversion’, ‘Conscientiousness’ and ‘Openness’. The scale consists of the remaining eight 4-item ‘subthemes’.

The two underlying scales in the model used by the Risk Type Compass represent two broad influences on risk tolerance and decision making. Scores on these two scales locate all participants on the Compass. A gender-balanced norm group of 10,000 people determine positions on these scales. The Compass has over 200 potential positions, and placement denotes participants’ Risk Type. Analysis of over 13,500 individuals indicates that Risk Types are evenly distributed across the general population.

The study consisted of 232 Mental Health Professionals. The sample was 85.3% female and had an average age of 37 (SD = 11). A diverse range of job roles within the profession were reflected, ranging from Directors (2) and Managers (14), to nursing staff (36 Nurses, 24 Healthcare Assistants), as well as Psychologists (30), Social Workers (18), Therapists (18), and Counsellors (8).

All participants completed the Risk Type Compass (Trickey, 2017) and the 25-item version of the CD-RISC (Connor & Davidson, 2003). The latter is a measure of resilience that scores responses on a 0-4 scale, resulting in an overall score ranging from 0-100.

Using the Risk Type Compass in a research capacity provides various levels of analysis, including Risk Type, scale and subtheme. Table 1 below presents the average CD-RISC scores for each Risk Type, with the highest and lowest scores highlighted in green and red respectively. The eight Risk Types (and Axial group) are broadly ordered by the RTi starting with ‘Wary’, which has the lowest RTi. 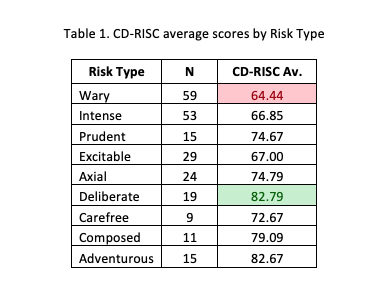 What immediately becomes apparent is that Risk Types vary considerably in their CD-RISC scores. Additional analysis indicates that these differences reach statistical significance in several cases. When viewed in conjunction with the RTC structure, it became apparent that the Emotional:Calm scale seemed prominent in predicting CD-RISC scores, with Risk Types placed at the ‘Emotional’ end of the Emotional:Calm scale (i.e. Wary, Intense and Excitable) obtaining lower resilience scores than those at the ‘Calm’ end (i.e. Deliberate, Composed and Adventurous). This prompted further analysis at the RTC’s scale level. Table 2 below presents the output of this correlational analysis.

The final step of the analysis was to adopt a more nuanced view by exploring findings at a subtheme level. Each of the RTC’s 18 subthemes includes four items that serve to provide additional interpretative capacity to supplement Risk Type and the three RTC scales. Whilst more nuanced, the limited items mean that caution is advised when applying these scores.

The strength of the relationship between the RTC’s ‘Emotional:Calm’ scale and CD-RISC is driven by several of the scales ten subthemes. The most influential of these subthemes include ‘Optimistic’, ‘Confident’, and ‘Apprehensive’. The Optimistic subtheme is defined as follows:

Displays an upbeat and positive mindset, turning problems into opportunities

With a highly significant correlation of ‘0.577’ with CD-RISC, optimism appears to be a key factor in determining levels of resilience. At the core of this relationship is the belief that difficult situations could encompass potential opportunities for growth, and that this perception acts as a ‘protective factor’ that manifests as greater resilience. Another highly significant correlation emerged with the Confident subtheme, which is defined as follows:

Self-assured, poised and projects an image of competence and positivity

This subtheme also reported a correlation with CD-RISC of ‘0.577’, indicating that those scoring highly on this metric would likely report greater resilience as well. The link is clear, as those who possess greater self-confidence are more likely to feel capable of overcoming adversity. The third most significant correlation occurred with the Apprehensive subtheme, which is defined as follows:

Tends to worry about things and to dwell on past misfortunes

Unsurprisingly, this subtheme reported a negative and highly significant finding of ‘-0.478’ with CD-RISC. One contributing factor to this relationship is the proclivity to perceive the past in a more negative light, as this is could adversely colour perceptions of the future.

Findings like these paint a powerful picture about the various relationships between personality and resilience. Previous research has indicated that Neuroticism can be a precursor to resilience (e.g. Lü et al., 2014), although correlations have previously been around the ‘-0.3’ level. The findings reported above not only align with previous literature but demonstrate the strength of the Risk Type Compass in its ability to assess personality.

These findings lead to the conclusion that the RTC could act as an important predictor of resilience. This leads to the question: to what degree can resilience be developed?

There is clear evidence that levels of resilience can be increased through various psychological interventions. Sharma et al. (2012) administered the CD-RISC to a group of medical centre employees before they started a 12-week stress management course. On completion of the training, scores on a re-administered CD-RISC assessment had increased significantly. Similar increases in pre- and post-CD-RISC scores were reported by Leventhal et al. (2016) after a sample of over 2000 rural Indian adolescents completed a school-based resilience curriculum.

Gowenlock (2014) reported that meditation practiced twice daily for eight weeks led to improved resilience in a sample of medical military personnel, whilst Rogchanchi et al. (2012) found that a sample receiving ‘rational emotive therapy’ experienced a significant increase in their CD-RISC scores relative to the control group. Benefits can even extend to online training, with Jung et al. (2016) reporting that online mind-body training proved more effective in increasing resilience compared with the control group with a sample of Korean hospital employees.

This is good news for anyone experiencing the consequences of low resilience. However, understanding the underlying factors potentially driving low resilience is a vital precursor to any psychological intervention. The raft of RTC research evidence demonstrates that individuals vary greatly due to their temperament and may even experience external events in a variety of different ways. Failing to recognise individual differences by applying a ‘one size fits all’ approach could undermine and even nullify the benefits of the intervention. This is supported by Vanhove et al.’s (2015) previously-cited meta-analysis, which indicated that targeted development efforts were more likely to succeed in achieving long-lasting improvements in resilience.

Becoming cognisant of an individual’s temperament therefore becomes an essential early component of the process. This is especially important given research indicating that resilience acts as a mediator between Neuroticism and negative affect (Lü et al., 2014). Previous RTC research reported a correlation between the Emotional:Calm scale and Warr’s (1990) Wellbeing scale of ‘0.6’, suggesting that whilst those residing in the more ‘emotional’ Risk Types of Wary, Intense and Excitable would be more prone to lower wellbeing, developing resilience could protect the individual. Understanding this is not only essential to the individuals in question, but to those tasked with managing and supporting them.

The outcome of this research is clear. Organisational initiatives tasked with developing resilience will be more likely to succeed when they are bespoke and targeted to individuals. The RTC, a psychological assessment of risk personality, can guide the focus of these interventions, and match the resilience intervention to the needs of the individual.

If you would like to discuss how the RTC could provide your business with valuable insight in to managing and developing resilience, drop us an email at info@psychological-consultancy.com, or give us a call on 01892 559 540.

Dr Simon Toms is a Chartered Psychologist and Associate Fellow of the British Psychological Society. In 2019, he was elected to Full Membership of the Division of Occupational Psychology. He is also a Chartered Scientist with the Science Council, Principal Practitioner with the Association for Business Psychology, published author, and PhD graduate. He currently works for Psychological Consultancy Ltd in the role of Principal Research Psychologist.

Sonia Shah is a Leadership Advisory Coordinator with Egon Zehnder, having previously worked as an Assessment Delivery Specialist for Korn Ferry. In addition to her degree in Biomedical Science, Sonia has also completed MSc’s in ‘Psychology’ and ‘Occupational and Organisational Psychology’, the latter whilst working in the mental health sector. She has presented the research this article is based on at conferences that include EAOHP (Lisbon, 2018), DOP (Chester, 2019), EAWOP (Turin, 2019), and ECP (Moscow, 2019). In addition to her professional interests, Sonia is also a local Councillor, part time swimming instructor and occasional marathon runner.

Gowenlock, L. (2014). The use of meditation to promote resilience in deployed medical personnel. Accessed 08-22-2014 at http://www.theracoustic.com/sites/default/files/US_Army_Study.pdf.