Football is played at an astounding pace. Top-level footballers reach speeds comparable to Olympic sprinters; with Kylian Mbappe recently reaching a staggering 36 km/h. The speed of players is only exceeded by the speed of the ball. Shots on goal regularly exceed 100 km/h, with the fastest shot on record clocking in at 211 km/h.

Functioning in this fast-paced environment pushes players to their physical and mental limits. It’s common for players to cover over 10 kilometres during a match, suggesting they are often on the brink of exhaustion. Research by Alexandre et al. (2020) demonstrated that footballers spend the majority of a 90-minute match at 70-90% of their maximum heartrate.

These stats reflect the physicality and skill of the modern game, but strength, speed and fitness are not the only characteristics that dictate performance. Mental performance is also key, and this is often reflected in the quality of a player’s decisions making.

There have been plenty of games that have hinged on a single decision for better or worse. You’ll struggle to find a football fan who hasn’t said some version of “why didn’t he pass it?” or “why wasn’t he in position?”. Matches not only demand hundreds of decisions from players; their speed dictates that these decisions must often be made at lightning-fast pace.

This often makes slower and more conscious approaches to decision making difficult. The result can be a moment of inspiration or a terrible game-changing mistake. The effect on decision making has been recognised by Lionel Messi, a player considered by many to be the greatest ever: 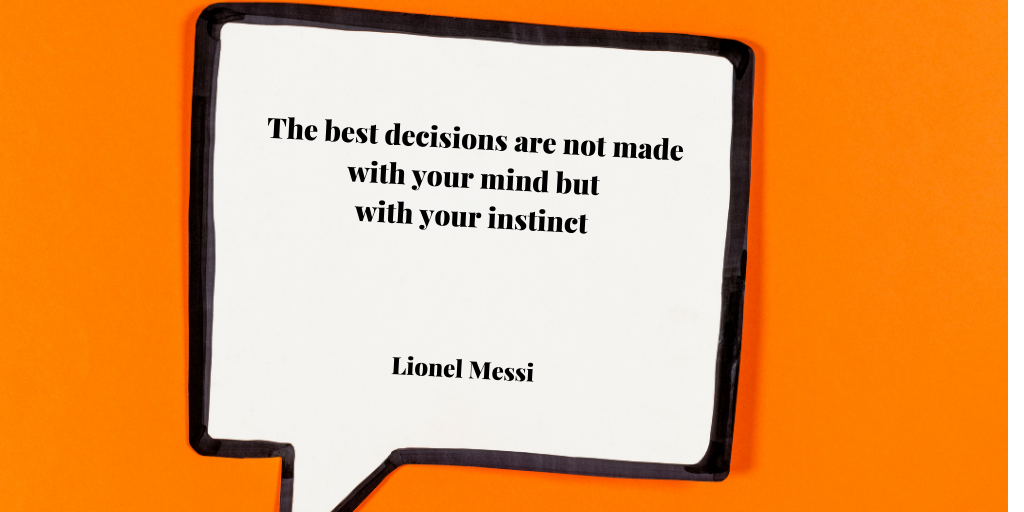 The impact of speed and stress maximises the influence of instinct and intuition on our decisions. Elite-level sport is perhaps the most prominent example of this; the rapid high-stakes nature of competition forces intuition front and centre.

Yet when placed in identical situations, the decisions and actions any player exhibits will vary. Although probably more visible on the pitch, this variability is not unique to football; we can all be characterised by the distinctiveness of our behaviours and our decision-making.

This variance is best understood through the lens of personality. Personality can be measured across various dimensions and understanding how differences manifest enables psychologists to predict a whole range of outcomes. One personality assessment that focusses on the outcomes of risk and decision making is the Risk Type Compass. Developed by Psychological Consultancy Ltd, the RTC works by using participants’ responses to locate them in one of over 200 positions on a 360° spectrum (see Fig. 1 below). 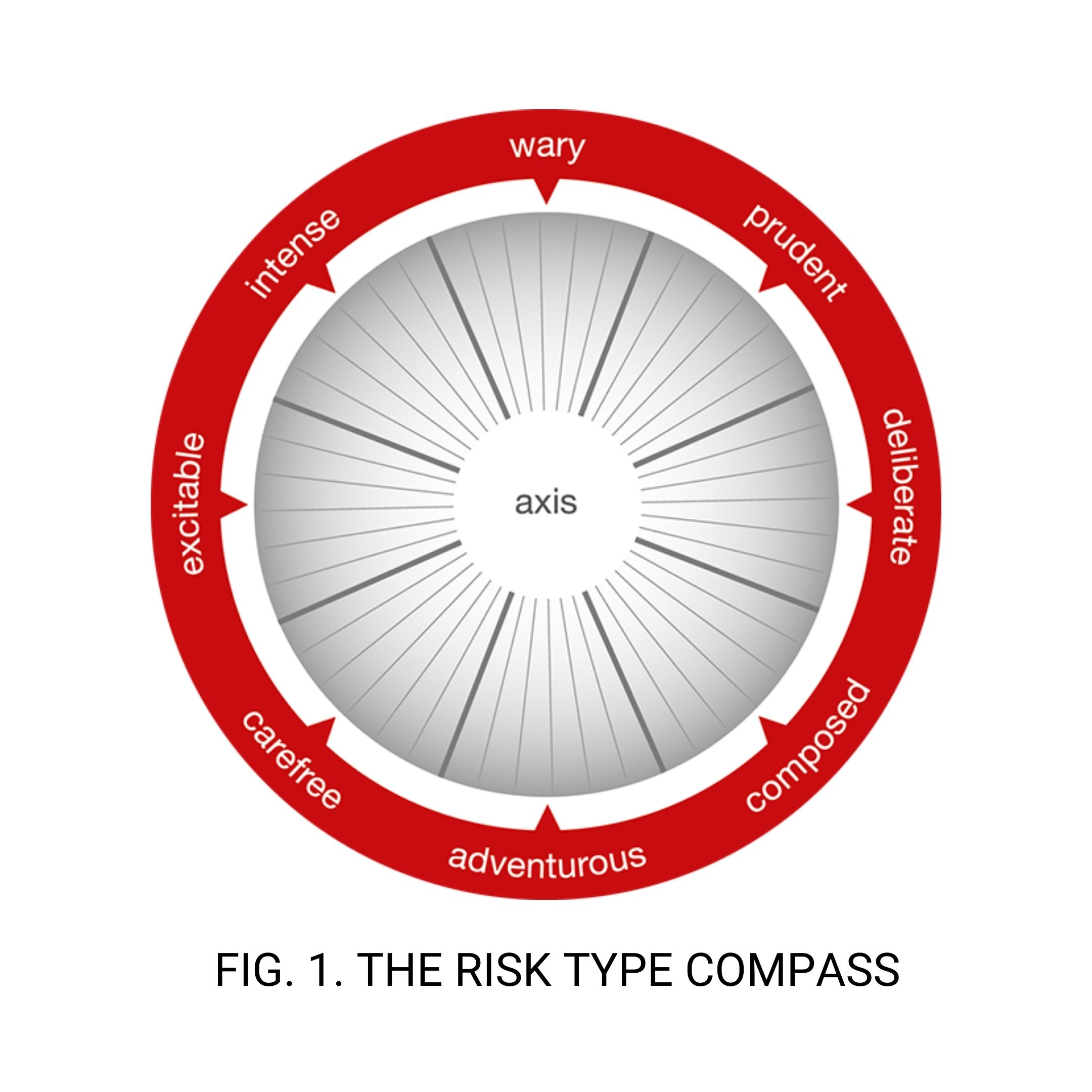 Their location on the compass serves to assign them into one of eight ‘Risk Types’ (or an ‘Axial’ group). Risk Type defines the way that we view our world: firstly, from an emotional perspective – in terms of fearfulness, anxiety, optimism or trust; and secondly, from a cognitive perspective – the need to make sense of perceptions and experience and to cope with ambiguity and uncertainty (Walport, 2014). Analysis of over 13k completions indicates that these Risk Types are relatively evenly distributed throughout the general population.

With this in mind, we debated the Risk Type characteristics that could make up Psychological Consultancy Ltd’s dream football team – the PCL Ponderers.

Defenders will always favour order over chaos and planning over spontaneity. Their aim is to smother risk in the quickest and safest way possible. Whether they play as a four or a three, defenders must work as a cohesive well-oiled unit. In open play, maintaining an inch-perfect line is vital. At set plays, they will understand who they should mark and how. Caution is the name of the game, and disciplined planning is the way to achieve it.

Characteristics of the Wary Risk Type are well suited to this role. Characterised by a combination of self-discipline and concern about any threat, Wary Risk Types are cautious, organised people who put security at the top of their agenda. Risk is seen as something that needs to be minimised whenever possible, ideally through a well-structured and disciplined defensive line.

The demands placed on wingers are considerable. Historically viewed as defensive aids, their contemporary role has shifted. They are now expected to be a significant additional dimension of their team’s attacking strategy. Balance is key. Players must weigh their defensive duties alongside their offensive ones, whilst simultaneously responding to the decisions and actions of the opponent.

Carefree Risk Type characteristics may adapt well to this role. Impulsive and unconventional, Carefree Risk Types will favour excitement seeking over repetitive routine. The opportunity to lead a sudden counterattack will be grabbed eagerly. In extreme cases, eagerness may give way to recklessness, likely to the detriment of defensive duties. Averse to detailed plans, the result will be a disruptive level of unpredictability that the opposition may struggle to cope with.

Typically positioned in front of the defensive line, holding midfielders will seek to dictate the tempo and strategy of the play. When defending, their job will be to smother the opponent’s attacks as soon as possible. When in possession, their role will be to keep the ball and get it where it needs to be. Possessing a strategic overview of the game is essential.

Perhaps the Composed Risk Type is best suited to these demands. With high levels of composure and self-confidence, Composed Risk Types will appear cool headed, calm and unemotional. Not overly encumbered with the need to be organised, they will display a degree of flexibility that can help them adapt and provide support in the way their team needs. When things go wrong, their ability to absorb stress will help them keep the team focussed and calm.

Playmakers pull the strings in their team’s attack. They are tasked with creating chances for others, so remaining alert to opportunity and gaps in play is essential. The best can shift their team from defence into attack in a heartbeat, so possessing a big-picture perspective is important. Against well-organised teams, spontaneity can be the key to breaking the deadlock. Managers may grant them a ‘free role’, absent of responsibility to defend or track back. Their aim is not to enforce the system, it is to disrupt it.

This may be a role particularly suited to Excitable Risk Types. Impulsivity and attraction to risk will be at the Excitable Risk Type’s core, but this may be matched with distress and despondency when things go wrong. Depending on the mood of the moment, they may embrace the spontaneity and enthusiasm needed to pierce a defence. Their high potential for creativity will be matched by their aversion to detailed planning, meaning teams must cater to this to harness their strengths.

The primary job of strikers is to score goals. The secondary job of strikers is to help teammates score goals. A loose ball in the penalty box is not a threat – it’s an opportunity. The best strikers have an uncanny ability to be in the right place at the right time; something often incorrectly attributed to luck. A cool head is also vital; split-second decisions will determine the outcome of the game. Maintaining composure during flashpoints of extreme pressure will frequently be the difference between scoring and a missed opportunity.

The Adventurous Risk Type could be well-suited to this role. At the root of the Adventurous Risk Type is a combination of impulsiveness and fearlessness. Possessing a deeply constitutional calmness leaves them free to act instinctively without undue concern for risk. Driven to seek out and engage with opportunities, performance will not dip at times of chaos. It may even thrive. Critically, their level-headedness will minimise the chance of derailment resulting from missed chances; they will immediately be focussed on the next available opportunity.

The role of emotion was particularly significant in recent research conducted by PCL into Mental Toughness. Emerging in sport psychology research as a critical component to elite-level performance, Mental Toughness enables athletes to perform effectively and thrive in demanding situations. Findings indicate the RTC possesses powerful predictive capability for Mental Toughness. You can read the exciting findings HERE.

There are obviously many qualities and skills that are critical for high performance. We are not for a moment proposing that Risk Type can be applied in the simplistic way implied by the illustration above. Nevertheless, the narrative around these Risk Type personality characteristics is very much in tune with team development and selection issues. They draw attention to aspects of performance that are beyond, and in some respects deeper than, the usual sporting metrics.

Each member of a team has a specific set of responsibilities that vary considerably from those of their teammates. Managers need to maximise the strengths of their players, whilst the opposition will seek to nullify them. Effectively assigning players to these roles therefore demands intra-team diversity across several dimensions, not least personality.

We see the potential value of the Risk Type Compass in sports as a tool for coaching and performance enhancement. There is a universality about Risk Type that derives from its congruence with neuroscience and its foundations in two highly consequential features of human nature; Emotion and Cognition; the foundations on which the Risk Type characteristics are built. The exceptional reliability of the RTC assessment (0.9+) combined with its readily understood and easily communicated implications, facilitates its easy incorporation into coaching dialogue.

Getting to grips with decision making as a highly consequential variable and a key element in sporting achievement represents a significant strategic advantage that could leverage significant performance enhancement.

Click to learn more about the Risk Type Compass!